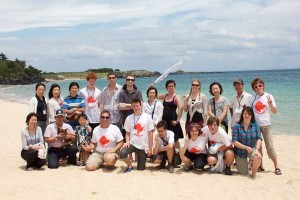 Ava Rudachyk is a second-year ALT living on Iki Island in Nagasaki Prefecture. Originally hailing from Canada, she organized a home-stay between Canadian high school students from Kitsilano High School in British Columbia and Japanese families on Iki island. It was not the first time for such a project. In 2009, Rainer Mehl, a former JET participant and current high school teacher from Vancouver, Canada, sent a bulletin asking if any Nagasaki JETs would be willing to help host some Canadian students for four days that March. Ava’s predecessor, Yuka Otaka, jumped at the opportunity to host Rainer and his students. The students enjoyed themselves so much, Rainer decided to make the Iki home-stay an annual event.

In the spring of 2010, the lack of interested students from Canada prevented the event from taking off, but this spring twenty eager Canadian students were more than ready to experience Iki Island’s rural life in March. However, after the earthquake and tsunami swept across northern Japan on March 11, the school board at Kitsilano High School cancelled the trip. The Canadian students then raised over 100,000 yen to go towards earthquake relief. The community members here were deeply moved!

After a delay, six of the twenty original students decided to come despite the disaster. In early July 2011, those six high school students and two teachers from Canada, including Rainer, went to Iki and participated in an array of cultural activities. The whole community got behind the home-stay project: the host families, the English teachers at Iki Commercial High School and Iki High School, ten community leaders, four ALTs besides Ava, many, many other volunteer community members (“Too many to count” she says), and Ava’s predecessor. 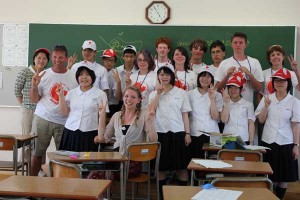 The Canadian students started their journey in Kyoto on June 30th, visiting Gion, Toei Uzumasa Eigamura, Nijo Castle, Ryoanji, Kinkakuji and Higashiyama. After sightseeing in Nara and Osaka, the Canadians went to Nagasaki City for two days before heading to Iki!

On Iki, the students first got a taste of the rich history of the island at the new museum, where they were welcomed by their host families and the home-stay committee. They then spent the afternoon at an elementary school, attending the Tanabata festival, and a nearby temple, where they learned how to do the tea ceremony, flower arrangement, zazen meditation and Japanese calligraphy. They stayed the night at the temple.

The kids spent a day sightseeing around Iki, first stopping at the stunning beaches for a chance to swim and meet the Iki ALTs. “Then one of the community members made us all a delicious Japanese curry for lunch! Our sightseeing in the afternoon consisted of seeing the famous “Monkey Rock”, burial mounds, and of course the famous fertility shrine, where they learned some “sex education”!” At four o’clock the Canadian students headed to Iki High School where they met Ava’s English club, who interviewed them and asked questions about life in Canada.

On the Saturday, the group saw the AMAZING Taiko team at Iki Commercial High School perform and tried their hands at Japanese drumming. Next, a hike on Tatsunoshima Island, a very small island off of Iki, with a picturesque view of the ocean, rocky cliffs and a turquoise sea. The students were shocked by the contrast of the urban Japan they had seen in Osaka and the very rural life of Iki Island. They then went to the local cultural hall where Ava’s  nihon bouyou (Japanese Fan Dancing) teacher provided beautiful Yukata and taught the students one of the dances. Lastly, more than fifty Iki residents attended a HUGE potluck party to say goodbye to the Canadian students. Both the students and the host-families were deeply moved by their experience. One of the Canadian students said “My home-stay family is actually the nicest people I have ever met! How is EVERYONE soooo NICE here!”.  At the closing ceremony, each host family prepared a speech in English for their Canadian student. “By the end, everyone was hugging and smiling!” 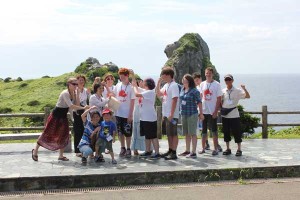 This project had a great impact on the Canadian and Japanese students, ALTs and community members involved. It allowed the unique opportunity for students of the same age from diverse backgrounds to interact and learn about each other’s ethnicity, beliefs, culture and language.  This project promoted understanding, tolerance and internationalism between cultures and showed one another the humanity we all share. It further advocated better relations between ALTs and community members and inspired all participants to open their hearts to new friendships and ways of life. “I believe the community members also saw the benefits of having ALTs in their communities, especially in rural cities,“ Ava says, “but most of all, I think everyone had fun and learned from this experience!”

If you are interested in starting a similar home-stay project, here’s what Ava has to say: “My advice for others who wish to implement something similar is to act on your idea, talk to people, get as many people involved as possible. Once you have the ball rolling you will be surprised how many people are willing and wanting to help. Also, patience is key; the bigger the project, the more of it you will need. I found interacting with community members required more patience and tolerance than one might expect. However, I found I also learned more about Japanese culture by working with the community. Organizing an event on your own time is different from working as an ALT within a school. I think it is very rewarding in the long run but definitely requires you to use your free time and initiative.”