This month’s JET Effect is focused on an exciting Irish event – with some important information about embassy grants to consider.

Noirin de Barra comes from Tottori City in Tottori prefecture. She is a second year JET. When Noirin, 2nd year Tom McCormack (also from Tottori City) and 1st year Pamela Cherry (from Daiei) received an email from their embassy, they were very interested.

‘As Irish JETs, we received an email from the Irish Embassy alerting us to the available grant for [an Irish informative] event. We thought it was a good opportunity, especially as there are proportionally a large number of Irish people living in Tottori prefecture, and Japanese people generally don’t seem to be too familiar with our little country’ Noirin explains. With the idea planted, Noirin, Tom and Pamela got to work. Their aim was to ‘publicise the links between Japan and Ireland and to introduce local people as well as other JETs to Irish culture.’

With the support of the embassy, Noirin, Tom and Pamela were able to organise a very full day of Irish-based activities. Noirin told us ‘we organised a “Get to Know Ireland” event in [the Fuse Sports Centre] in Tottori City [on Saturday, November 13th 2010). The event involved three different Irish cultural workshops: an Irish dance workshop, and Irish song and language workshop and an Irish music workshop. Each workshop ran twice so that people had the opportunity to take part in two different sessions. We had a break in between sessions during which we served Irish food and drink. After the workshops, we had a traditional Irish ceili. A band came from Shimane to play Irish music for us and the participants of the workshops were invited to perform what they had learned. We decorated the venue with Irish posters and information, and had Japanese booklets about Ireland around the room for people to take home.’ 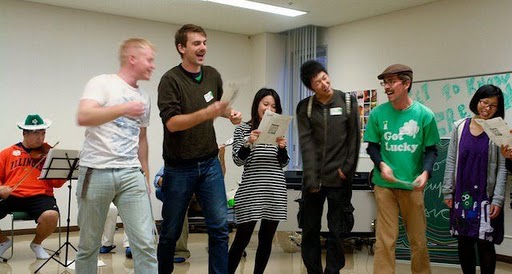 It sounds like Noirin, Tom and Pamela must have had their hands full with all the organising for this event, even with the financial support from the embassy. However, they were not alone. Noirin, Tom and Pamela reached out to their local foreign community and were very pleased with the results. ‘We had a lot of help in translation from Joshua Trued, and American who lives in Kurayoshi, and Tim Wiltshire, a university professor in Yonago also helped a great deal by organising Ceol & Craic, an Irish band from Shimane. Kira Battle, another JET in the prefecture, was also great help as she led one of the workshops for us. We had a lot of help from Tottori AJET as well, particularly with advertising the event. ‘ Noirin explains.

People from across the spectrum turned up on the day ‘[there] were other JETs, Japanese friends and people from the community – particularly people from our local English conversation group’ Noirin told us. ‘Most people that came did not know very much about Ireland so they were surprised and very interested to learn about our very distinct culture as well as the links between Japan and Ireland. Many of them expressed a desire to visit Ireland after the event, where previously they might have had difficulty finding it on a map.’

The participants were even able to take home a piece of Ireland due to the grant received from the Irish Embassy. ‘We gave everyone their own Irish musical instrument (the tin whistle). We gave everyone instructions in Japanese on how to play and almost everyone was enthusiastic about continuing to learn.’ As the participants were able to take home something from the event, their interest in Ireland will surely continue into the future too.

Noirin has some final advice for anyone else considering a National event such as this. ‘We would recommend that people leave themselves a lot of time to organise such an event. Things like booking a venue and letting people know should be done a few months before if possible. We would also recommend contacting your Embassy as soon as possible if you are doing any kind of cultural event relating to your country. We were surprised by how much information our Embassy had and how willing they were to help us out by sending us posters and flags.’

So it seems that it is possible to look even further than your local JET community for support in cultural events. Why not check out your embassy home page and see whether together, you could create an all out event just as Noirin, Tom and Pamela did.