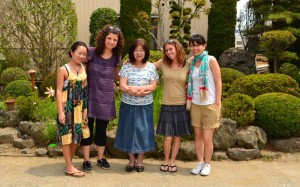 Tell us about yourself.
My name is Estelle Hebert and I’m a second year JET in Hiroshima City. Honestly speaking, before coming to Japan, my knowledge of Japanese culture and language was pretty much zero… I came here for new inspiration to make a documentary project after completing my Masters degree in Toronto, Canada. I had just wrapped up a 2-year documentary project, and I felt it was time for me to move on to a new place, a new environment, and new experiences. An ex-JET spoke to me about her experience in Japan, and soon after, I was on a jet plane heading to what I now consider one of the most extraordinary countries I’ve ever visited.

What project are you involved in? How did you get involved ?
Last July, I traveled to Ishinomaki in Miyagi Prefecture simply to volunteer and provide post-tsunami relief efforts. Through couchsurfing.com, I met a fantastic girl named Chizu, who hosted me for my entire trip there. She had survived the tsunami, along with her family, and my home stay ended up being the best highlight of my entire year spent thus far in Japan.

After volunteering for a few days, Chizu and I ended up driving along the coast of Miyagi Prefecture for a few hours. The long and winding road led to the fishery village of Funakoshi, where I was amazed to see the fishermen continuing their business despite the entire village being in ruins.  I was particularly touched by the fishermen’s testimonies, including Tetsuo-san, who stood next to his son and grandson’s gravestone, trying to find words as he glanced at what was left of his hometown: just a few standing houses amongst immense piles of rubble.

After listening to a few testimonies, observing the beautiful landscape, and witnessing the fishermen’s positive spirit and relentless efforts, I decided to hop on board and make use of my documentary media background to help share the story of Funakoshi to the world. 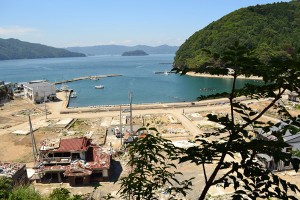 I have recently launched a fund raising campaign called Brighter Than Tomorrow, in support of the local community of Funakoshi by assisting to provide the local fishermen with much-needed fishing gear/equipment including storage space (refrigerators) and out-boat motors. The campaign also aims to inform the international community of the ongoing activities taking place in the village, in support of a reconstruction plan that has yet to be approved by the local government. In doing so, I’m working on a feature-length documentary telling the remarkable journey of a small group of fishermen working tirelessly to keep both their businesses and hometown alive despite having lost friends, family members and their livelihood in the tsunami.

When and where does your project take place?
The ongoing campaign was launched on October 29th, and will end on December 31st, 2011. The idea is to bring money to the fishermen at the start of the New Year to help them purchase some much-needed equipment. In the meantime, the documentary is currently under production. I am traveling to Ishinomaki and Funakoshi every month for film shoots. I plan on filming over the next 12 months before hitting the editing room.

The campaign is reaching out to people all around the globe, while the documentary is being filmed in Funakoshi and Ishinomaki. Once completed, the documentary will be submitted to all major International Film/Documentary Festivals.

How many people are involved?
I am currently working as an independent artist, in partnership with Chizu Ishikawa, whom I met last July during my volunteer trip.

Inspired by the fishermen’s strength, patience, and kindness, Chizu often travels to Funakoshi, her mother’s hometown, from Ishinomaki (where she currently resides) in support of the local community. Like many others living in the area that survived the tsunami, she doesn’t want to be forgotten, nor does she want the community of Funakoshi to be left behind. She hopes that the story of Funakoshi will reach many across the globe, and that the locals will be able to return to their village in the near future. She also likes to quote her mother’s cousin, one of the fishermen, “Even though the ocean is responsible for giving us such a hard time, we’re still surviving thanks to its resources”… evoking what many Japanese believe the ocean to be: a true blessing of nature.

Other JETs in Hiroshima-ken have offered me their services to assist me during film shoots. In terms of monetary contributions, I am reaching out to everyone I know, including my Japanese co-workers, my circle of friends in Japan, the JET community, as well as everyone else I know outside Japan. We are relying tremendously on word of mouth.

What impact does your project have on you and your community?
So far, on a personal level, it’s been a life-changing experience. I’ve always tackled humanitarian issues in my past documentary projects, yet this is the first time I feel such a tremendous connection with those whom I’m documenting. I am feeding off the amazing support from everyone in my surrounding, and most importantly, from the local community of Funakoshi who want this documentary to become a reality.

It’s difficult for me to put into words everything I experience when I’m up north in Tohoku. You would think it would be easier—on an emotional level—to be there a second or third time, but it’s not.  Deep inside, I know I’m able to make a small contribution in support of their recovery. And being involved with a community that is both struggling yet determined to return home some day, it’s quite touching.

Although no one can imagine what it must feel like to lose everything, I always come back from Miyagi feeling both grateful and troubled, stunned yet amazed, distraught but inspired…

For me, this project is a chance to make use of my documentary background in support of a small community that is relying on as many individuals as possible to make their journey to recovery slightly less bumpy.  Slightly.

In terms of the community, I am convinced the impact will be quite positive since they need money to purchase some necessary fishing equipment, as well as the need for as much media attention as possible. They need people to document their ongoing activities, in the hopes that it will pressure their local government to accept a reconstruction plan.

What advice do you have for other people who wish to do something similar?
This may sound cliché, but make sure you are passionate about your project. Without passion, you cannot achieve great results.

I have two passions in life: one is traveling and the other is documentary making. The JET program has allowed me to pursue both of these passions, and I am more than grateful for that.

When starting a project, don’t worry so much about the end result… just follow your instincts! You can’t always rely on other people to get things done in life… you have to be the one that makes things happen. Be a leader, and I promise you that others will follow in your footstep and give you the support you need if you are passionate, determined, and able to adopt an empathetic and positive attitude.

Lastly, don’t be afraid to challenge yourself. Take risks. If you believe in your project strong enough, the risks won’t matter to you.

—
If you would like additional information on the project, please visit the campaign page and/or website here. 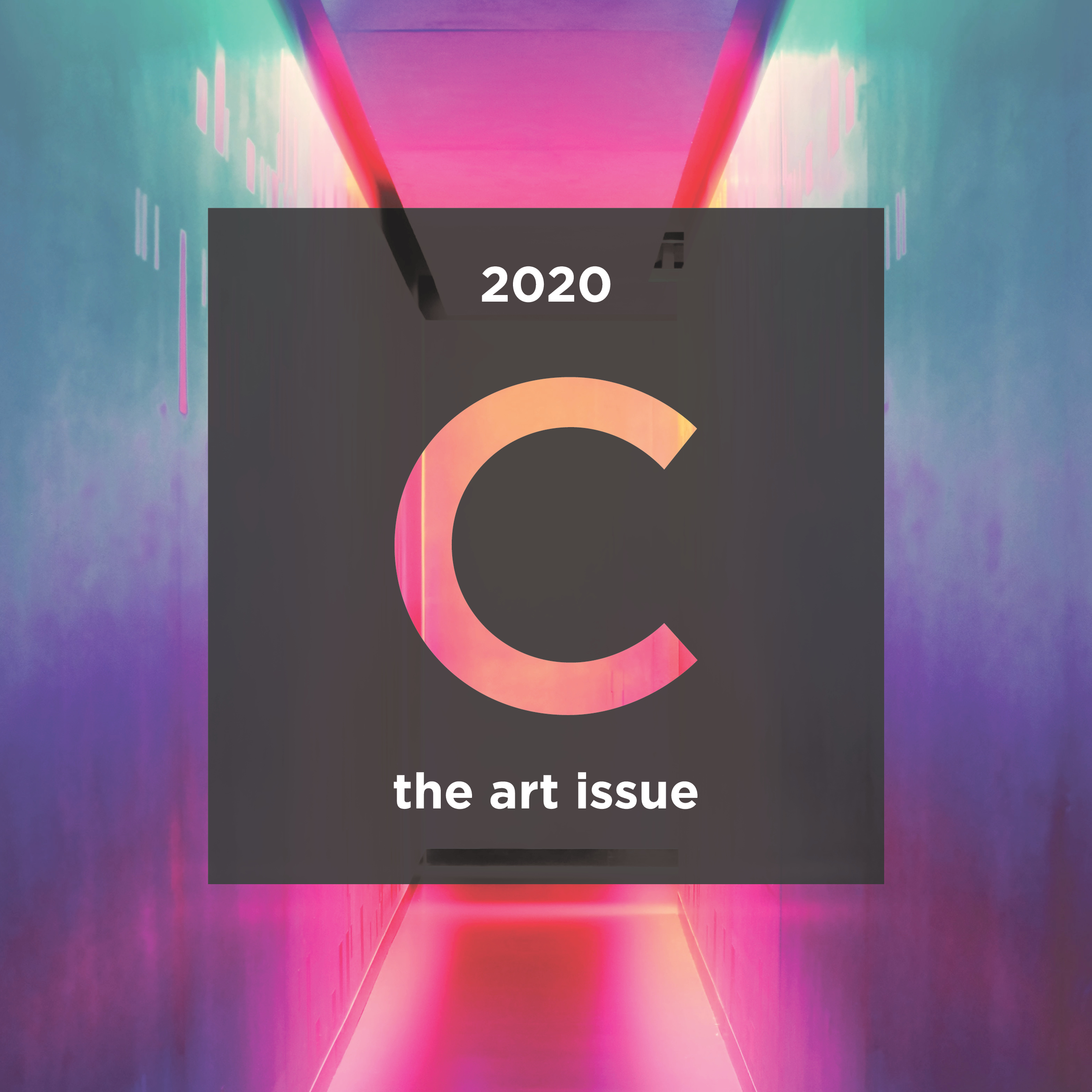 We have had the honor of showcasing some amazing articles this 2019-2020 term, and now we are excited to show off even more work of the various talented and creative individuals that live in Japan! All of the artists currently live and work in Japan and come from various backgrounds. This year we’re featuring art in various different mediums. Painting, Poems, Photography, oh my! Please enjoy our 5th installment of C and Connect will soon be back for the 2020-2021 term with fresh faces and new stories!