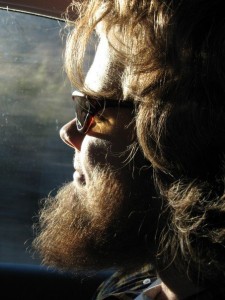 Jonathan Fisher states clearly, right off the bat, that everyone calls him Fish. Until recently, he was the ALT Prefectural Advisor for Hiroshima Prefecture, working as an ALT at Kure Miyahara High School in Kure City and putting in a day and a half every week at the Hiroshima Prefectural Board of Education in Hiroshima City. Now, however, after three years in the JET Programme, he has returned to North America to pursue a graduate degree in Education Studies at the University of British Columbia in Vancouver. 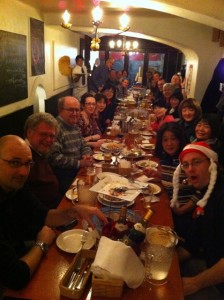 “I found out about JALT by accident, by filling out an information card that came with some ESL teaching materials I had purchased. After that, the Hiroshima chapter contacted me.”

The Hiroshima JALT chapter holds monthly meetings in Hiroshima City, which is most often comprised of academic-style presentations on the craft of teaching English as a second language. These presentations are sometimes led by participating members of the chapter, but more often guest experts from around Japan are invited to give lectures on broad-ranging topics in education theory and practice. Presentations are most often given in English with supporting materials in Japanese, though members of Hiroshima JALT are both native and non-native English speakers.

“Hiroshima’s chapter of JALT is central to the English teaching community here. I feel very lucky to have tapped into this incredible resource.”

In addition to these regular monthly meetings, the JALT chapters hold several annual social events, which are a fantastic way to network locally with professional teachers in the area. JALT also holds a national conference every year. “There are lectures on topics relevant to every JET from around the country and around the world. It’s really surprising that more ALTs aren’t getting involved with JALT,” Fish says. 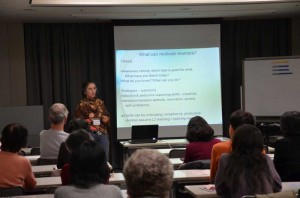 Fish hasn’t had the opportunity to attend a national conference yet, but he sincerely hopes that JETs will take advantage of the opportunity and take part in one. (This year’s conference, JALT2011: the 37th Annual International Conference on Language Teaching and Learning, will be held November 18-21 at the National Olympics Memorial Centre in Yoyogi, Tokyo. Keep it on your radar.)
Fish adds, “JALT is really an organization that is well worth the time of any JET who is serious about teaching as a career.”

“My primary involvement in the national JALT organization has been as a member of the volunteer editorial staff of The Language Teacher, JALT’s bi-monthly membership publication and one of the only fully peer-reviewed language education publications in the world. Recently I even had my own article approved for publication in JALT’s semi-annual members’ research journal, The JALT Journal. Staying involved in JALT has not only helped me keep my teaching methods fresh and up-to-date, it’s also provided me with the opportunity to continue participating in an academic community– a goal of particular importance to me as I’ve been applying to graduate school during the past six months.”

Fish plans to continue contributing to The Language Teacher (as a matter of fact, this August he was at home in North Carolina proofreading the pre-conference special issue). He encourages anyone interested in a career in teaching to check out the JALT website.