While attending Tokyo Fashion Week for Connect magazine, editors Verity Townsend and Erica Grainger got the chance to speak with a few designers on the red carpet. Check out their interviews below, and open the May 2015 issue of Connect magazine to read their reviews and impressions of the week-long show.

An interview with Henry Holland

British designer Henry Holland started out making ’80s-esque catchphrase T-shirts for fashion fans before founding his own brand House of Holland in 2008. Having had an interest in his designs since watching him host UK Channel 4’s series Frock Me back in 2008, I was excited to talk to him at Fashion Week. 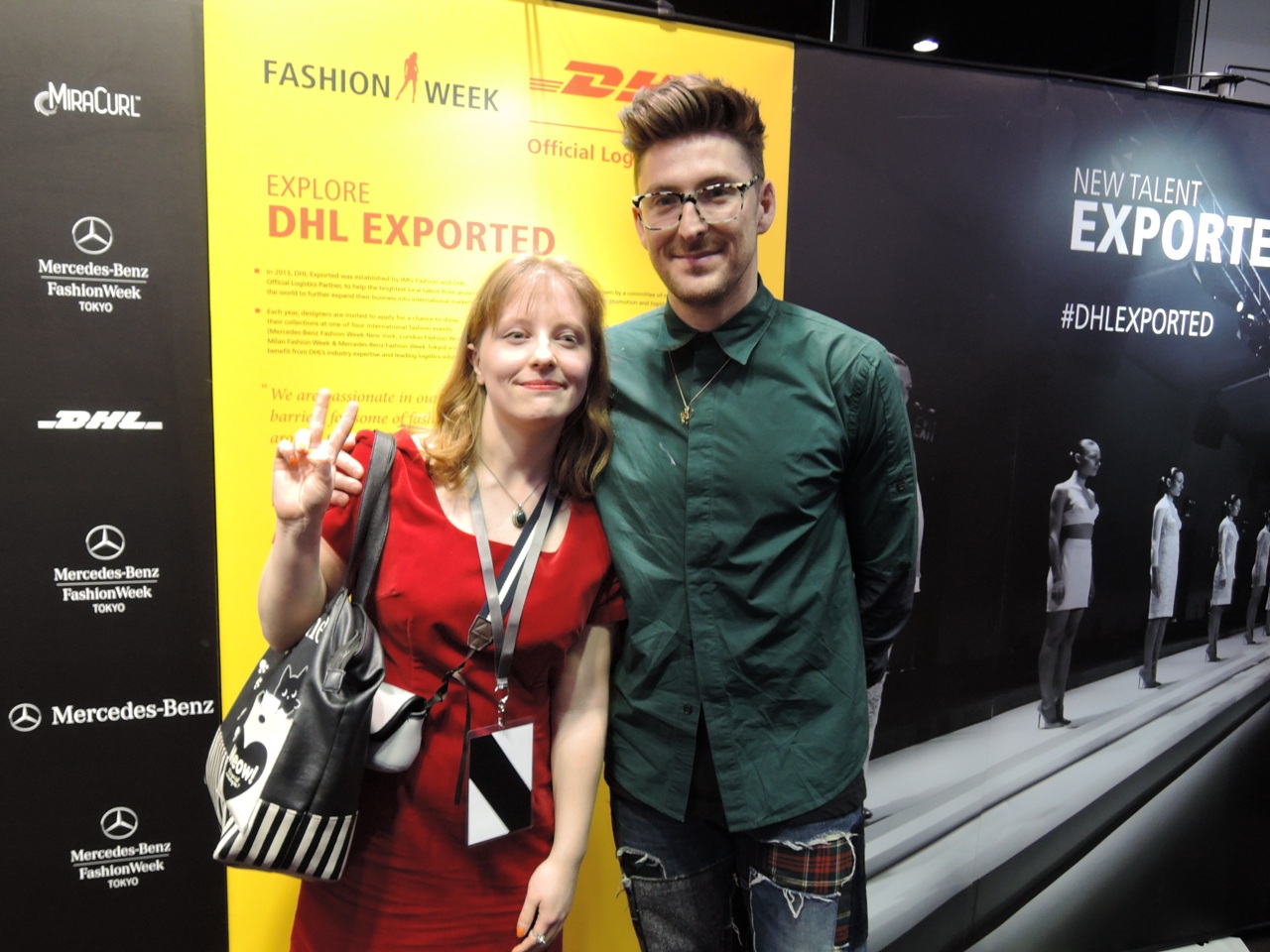 First of all, what is the latest collection’s concept?
I wanted to create an image of an uptown, fictional and futuristic city. I think the outfits in this collection have a tougher image than in my previous ones.

What was your inspiration for this?
I have been inspired by my travels—in particular the vibe and essence of downtown Tokyo. I was also influenced by Fritz Lang’s Metropolis. In my mind, I wanted to explore how a woman would live in a constricted future world—and consequently how this would be reflected in what she wore.

The current collection has a tougher image than your previous ones—would you say that the House of Holland brand is gradually evolving towards a tougher image?
Well, even when I design more typically feminine pieces, I always design for strong women. The kind of confident and savvy girl who wears labels without letting them wear her. The image of the House of Holland woman evolves in a fluid way. When I design, I picture the kind of woman who will wear the clothes—I’m always interested in using design to explore the different facets of women’s characters. This particular collection shows a tougher side of that woman’s personality. Henry with some of the models from his show

This time you have partnered with DHL to bring this show to Japan, what do you hope to gain from this?
The DHL exporting program has helped lift House of Holland’s profile by allowing us to do shows at Tokyo Fashion Week. This association will hopefully help us to create a base in Japan—we are already being stocked by Isetan.

Your designs often feature lots of colourful prints. Is there a particular print in today’s show, such as the pink and black check, that you would say defines this collection?
Although that pattern was used a lot in the show, this collection is not about a particular pattern or fabric—the focus is on texture and creating contrast. So, I have used a wide variety of differing fabrics, such as leather and Mongolian fur.

Click here to see more outfits from the collection and watch a video of the show.

Ek Thongprasert is a Thai designer, who studied fashion at Hogeschool Antwerpen, Belgium (2004-07). His label, CURATED BY EK THONGPRASERT, and collection consists of unique jewelery and clothing. His philosophy is all about challenging people’s perceptions. For Thongprasert’s latest collection, he was inspired by Haruki Murakami’s novel 1Q84, and imagined a parallel universe for men and women. In this universe, explorers from Africa colonized the West, and traditional African cultural references permeated the fashion world. One can see the African influence in his latest fall collection. 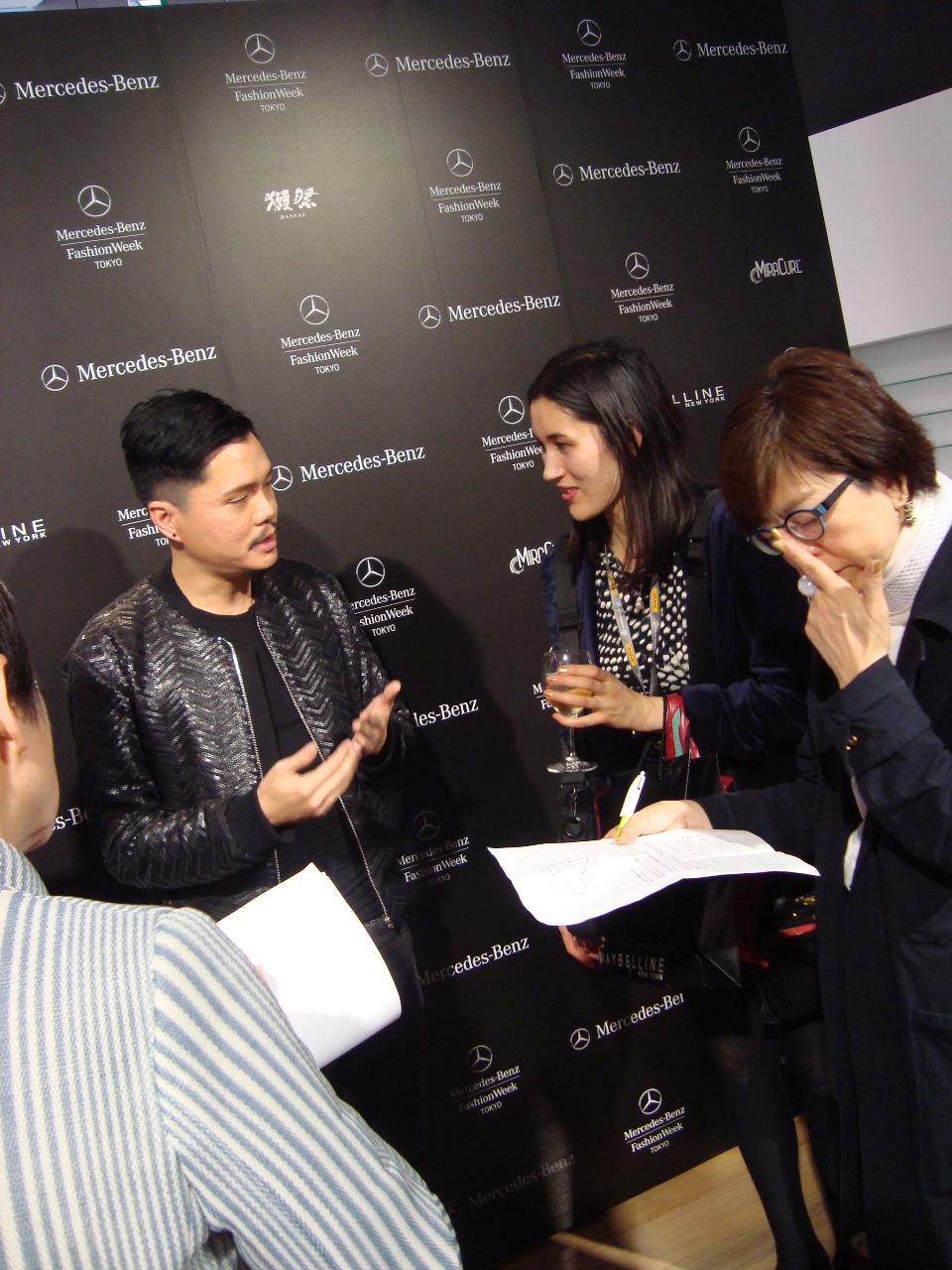 Erica: Hello, I really enjoyed your show.
Ek: Thank you.

I noticed your theme was Africa for this collection. What inspired you to use Africa?
Well, every collection I choose has a different theme. This year, I chose Africa because I wanted to pose the question: ‘What if the super powers of the world weren’t America, China, Russia. What if it was Africa?’ Africa has such a rich culture and it’s often forgotten amongst all the other major issues we hear about. War, famine, disease. I thought it was time to celebrate Africa.

I see, that’s really interesting. Have you ever been to Africa?
No, not yet, but I really want to go. There are so many places I want to visit, South America, Russia, Australia… Oh, I’m from Australia. You must go sometime. It’s very different to Japan and Thailand. Within Australia, there is lot of Asian influence due to the immigration from China, Japan, Thailand, Vietnam, India…
Oh, is that so? What is the fashion like?

Hmm…there is a lot of variety. For example, fashion from the surf culture, which produces a lot of great bathing suits and beachwear attire. Then, there’s a huge variety of high, medium and low fashion and designers that cater to all these markets.
Who is the most famous Australian designer? Oh…maybe Collette Dinnigan or Carla Zampatti. I’m curious, who is your muse?
Hmm…I don’t have a single one. I have many. It ranges from a powerful energy I feel in a person, to the way a room lights up when someone enters it. For instance right now, you are my muse.

Me?
Yes, you have something I can’t define. The French call it, je ne sais quoi. There’s a mystery within you, something that draws people in. May I ask where you’re from?

I’m half British, half Japanese, but used to live in Australia.
Ah, that explains it. You’re Euro-Asian.

How do you design your collection?
I start with a concept in my mind, and then I begin sketching ideas. and slowly it becomes something that makes sense. For this collection, I started with this philosophy of turning the world upside down and putting Africa as the biggest superpower in the world. Naturally, I tried to imagine, what kinds of clothes do they wear? What kind of look do they have? How can this be appropriated? I see. Did you use other designers, like John Paul Gaultier as your inspiration?
Not really. He has his own unique methods and has a different vision to me. I didn’t really reference any other designer in this collection. If I did, it was accidental.

Oh, that’s very impressive. What do you hope to achieve with this collection?
I want people to see Africa in a new light, in a new perspective, with a different attitude towards it. I hope people gain a new appreciation for the richness of African culture and see Africa as a powerful and rich continent. It is a superpower in its own unique way. One just has to change the traditional approach that we all start with to see this.

That’s a really powerful idea. Thank you for your time.
No, thank you. Please enjoy my collection! Hungry for more Fashion Week coverage? Well, head over to The Japan Times and check out Samuel Thomas and Misha Janette’s informative article ‘Tokyo fashion week: Womenswear celebrates an eclectic lineup; menswear draws inspiration from the street’ for an in-depth look at the range of collections that Fashion Week wowed us with.