Yabusame: An Ancient Tradition Has a New Face

An interview with Jon Hughes, the first foreigner to mount a horse at Kumamoto’s Takeda Ryu Shrine

Jon was an Assistant Language teacher in Kumamoto City, Kumamoto Prefecture from 2010 to 2014. Before JET, he was an exchange student in Hokkaido, and came back to Japan to teach English. He wanted to try a new experience, embrace the culture and get involved in his community. The best way for him was to start yabusame, the ancient martial art which is a combination of horse back riding and archery. He became the first foreigner to mount a horse at the Takeda Ryu Shrine. We spoke with him about his experiences.

The short answer to that question is five words long: Traditional Japanese archery on horseback. The longer answer is that is a martial art that dates back over 900 years to the Heian Period, to a time when Kyoto was the capital of Japan, and the samurai class had arisen a just a few decades prior. Today, there are two styles of yabusame: Takeda-Ryu, based in Kumamoto; and Ogasawara-Ryu, based in Kanagawa. It is usually performed at Shinto shrines as part of prayers for peace, good health, and the welfare of people all over the world. At these performances, riders dressed in traditional clothing, shoot at wooden or bamboo targets from a galloping horse. 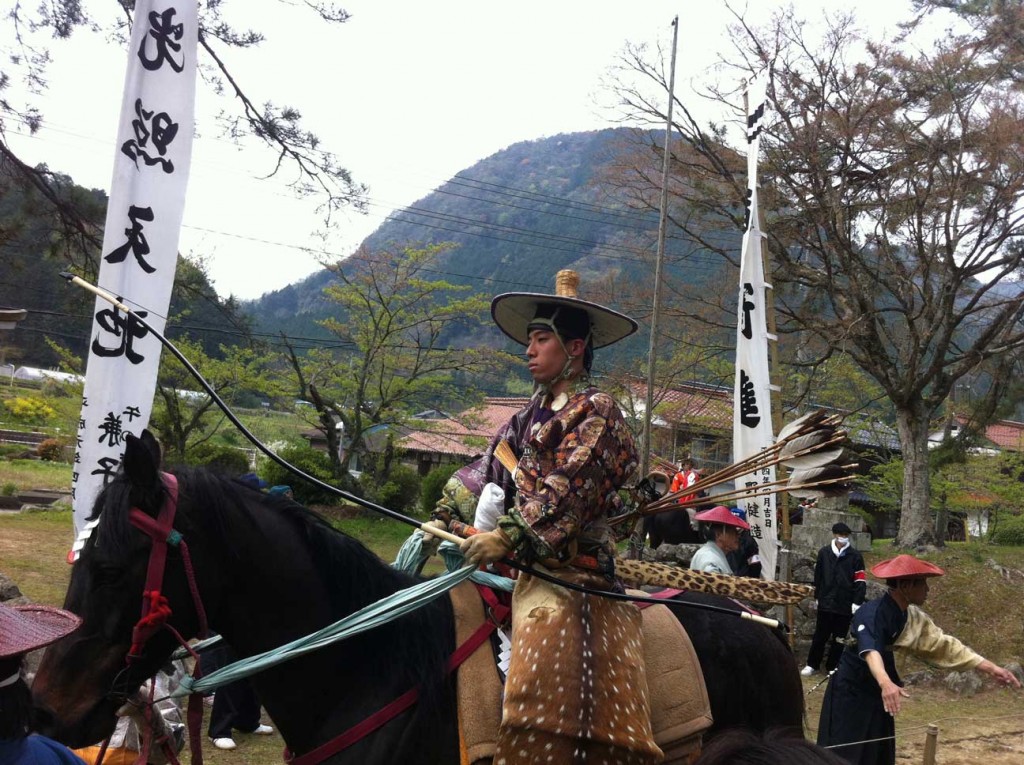 A Yabusame archer waits to enter the field.

Why yabusame? What kept you going since it takes years to get on a horse, let alone hold a bow?

I came to yabusame through pure coincidence. I had very little riding experience and I had never really done archery before arriving in Japan. I was looking to take up a new martial art, probably something that used weapons because, well, after a decade of karate when I was younger, I just wanted a chance to play with some sharp pointy things this time. That’s when I heard about kyudo (the Japanese martial art of longbow archery) and I was introduced to a kyudo teacher. It just so happened that that kyudo teacher is also the head of the Takeda-Ryu style of yabusame. I was told about an upcoming yabusame performance, and after seeing it, I asked about joining. I knew it would take a long time, but having learned how uncommon it is in Japan, in spite of its long history and epic levels of bad-assness, as well as learning that Takeda-Ryu had never admitted a non-Japanese before, it just seemed like the natural thing to do.

What does each practice involve?

I can really only speak for Takeda-Ryu. Some practices use a wooden horse to practice shooting from. The wooden horse is able to spin. The spinning allows the archers to practice the timing of nocking and drawing an arrow between targets. The spinning also mimics the way the angle to the target relative to the horse changes as it is going past. Most yabusame practice, however, involve either riding or archery seperately. I think this is more because of a lack of dedicated facilities specifically for yabusame than anything else. And I don’t know of another equestrian sport that requires a long, straight, narrow track with open space to one side for setting up targets and not accidentally shooting people and/or property. Occasionally though, there will be a training camp or sorts where a track is set up to practice putting riding and archery together. 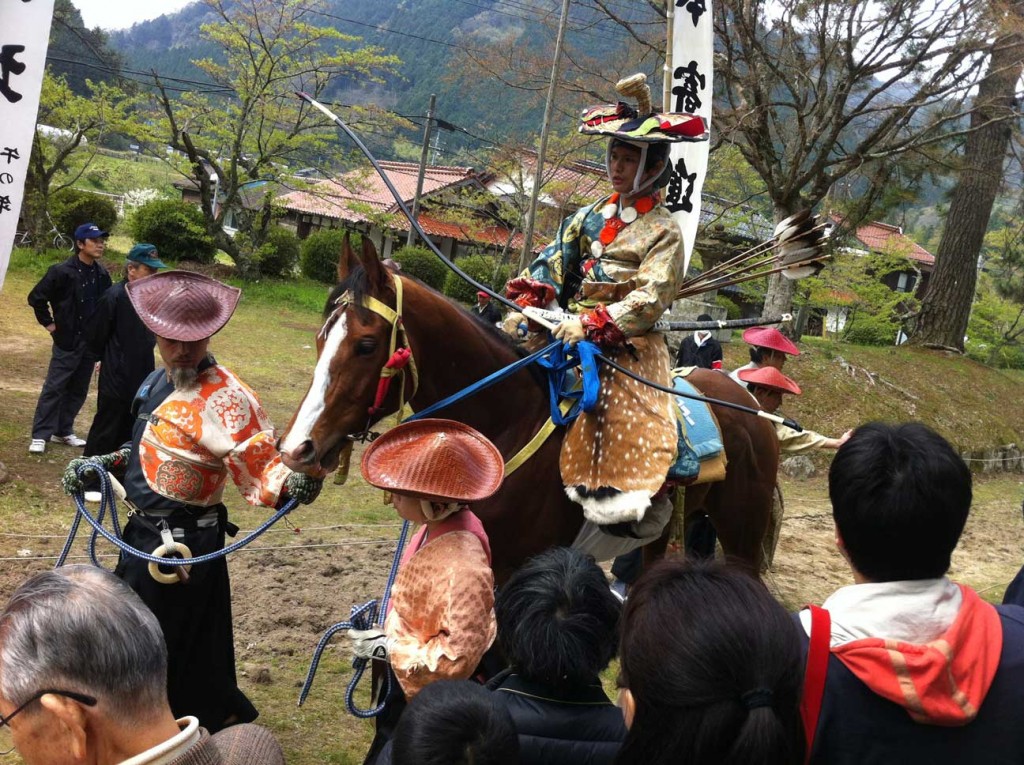 A Yabusame archer in traditional finery and armor.

What was the best part about it?

The best part of yabusame for me is how traditional it all is. All of the clothing and equipment is done in the traditional, and with few exceptions, made with traditional materials. When you are watching yabusame, the people you are watching are no longer the doctors and teachers and policemen they are every other day; they become samurai. In those moments, you catching a glimpse of a piece of Japan’s past. And it’s a piece of Japan’s culture that could easily be lost one day. These days, there are fewer and fewer people who are willing and able to invest the time and the money into keeping yabusame alive. And that makes the traditions of yabusame all the more special.

How did it change you and the community you were a part of?

I found it to be a really good experience to interact with people from all different walks of life, brought together by this one common interest. I think that as JETs, especially ALTs, it is very easy to find ourselves surrounded only be people who know us specifically because of our foreignness or because of our English abilities. It sometimes takes a concerted effort to break out of that and find people who aren’t interested in either of those things. I was lucky enough to find that in my yabusame group. Yes, it was sometimes more challenging not being able to fall back on English at times. And yes, there were often more cultural barriers to navigate because the people I was with may have had less experience with foreigners and foreign cultures and were less equipped to help me by meeting me half way. But, isn’t internationalization what the JET Programme is all about?

Any advice for people starting out and you wish someone told you when you started?

If you are starting out in yabusame, you should fully realize how long it will take before you achieve any level of proficiency in yabusame, if you achieve anything at all. The truth is that you may not ever get to the point where you are actually doing mounted archery. Most of the archers you see have been practicing for a decade or more. So unless you are coming into it with a lot of riding experience as well as archery experience, it may take longer than the time you have on JET to get there. My advice would be to focus more on enjoying the process and learning about the history and culture behind yabusame instead of the end goal of shooting at things from atop a galloping horse.

Jon Hughes was an assistant language teacher in the place people ride and eat horses (Kumamoto). With a passion for linguistics, he wanted to teach English grammar to kids who barely understood the grammar of their own language. Originally from the land of maple syrup-flavoured sweets and Rocky Mountains (Canada), he had an interest in martial arts and Japanese traditions. Yabusame fit both interests.