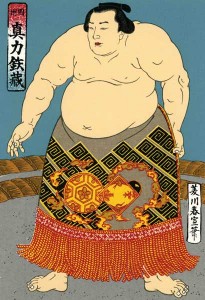 Of all the sports in the world, none is quite so unique as sumo wrestling. In what other sport do the pre-match rituals last longer than the game? Where else will we see the competitors and referees wearing styles as dictated over three hundred years ago? For that matter, what other sport boasts referees more gorgeously attired than a courting peacock? Where else will we see quite so much salt tossed, or so many girthful bellies slapped?

While baseball may be the more popular sport in Japan, few Japanese will argue that it has replaced sumo as the national sport. While baseball is a recent import from across the water, sumo is a homegrown sport born from the rituals of Shinto. Originally, sumo bouts were held as part of fertility and harvest festivals (and some still are). Even today in Tokyo, the top-ranking sumo wrestlers take part in the New Year ceremonies, and in the bean-throwing ceremonies at certain temples on Setsubun (a holiday in early February, marking the beginning of spring in the old calendar).

Watching the bimonthly professional sumo matches means taking a step back into the antique rituals of the Edo era. Pro sumo tournaments began in the 1680’s, and the gyoji, or referees, still wear the elaborate embroidered garb, stiff with gold, of an Edo courtier and soft black caps that tie under their chins. Holding an object like a fan out before them, in strong voices they call the names of the combatants and the names of the winners. Despite the heavy garb, they are quite swift. The rikishi (wrestlers) still wear the glossy top-knotted hairstyles and loincloths designated to their class long, long ago. 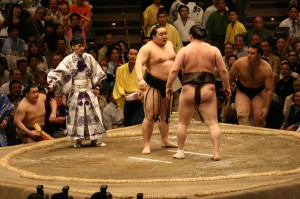 In front of the Grand Sumo Tournament stadium, the colourful banners of hundreds of sponsors flutter in the wind. Inside, people sit on tatami mats with floor cushions close to the ring (or in bleacher-style seating at the back), spreading out their lunches and beers as if they were at a picnic. The best seats, of course, are the cushions closest to the dohyo (ring), but those struck me as rather dangerous. Sumo wrestlers are thrown with great force from the ring, and have been known to fly into the spectators kneeling below them.

The fights are still conducted on a raised earthen platform with a dohyo (ring) formed from buried bags of rice. Above the dohyo is suspended a large roof, reminiscent of a Shinto shrine. The bouts open and close with the same ritual movements of purification and intimidation. A drink from a ladle of clear water and a sprinkling of salt on the earthen surface of the ring purify the body and the place. Stretching, stomping, and belly-slapping are intended to prepare the body and ‘psyche out’ the opponent. These may be repeated several times before the match actually commences. The match itself is swift, ending when a wrestler is thrown from the ring or touches any part of his body other than his feet to the ground. Then the next match will commence. As famous wrestlers enter the ring, zealous fans call their names (this is also done in kabuki, when famous actors make their entrances).

In sumo, there is the east division and the west division. They have separate entrances to prevent wrestlers in the different divisions from seeing their opponents before the fights. Wrestlers train in different ‘stables.’ 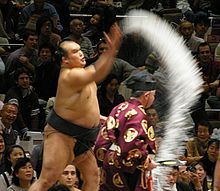 The top-ranked wrestlers are quite different from the low-ranking wrestlers who start the afternoon matches. For one thing, they’re bigger. Sometimes much, much bigger. There are no weight divisions in sumo, but it stands to reason that bigger is better in this sport. Skill counts for a lot, but the best wrestlers are skilled and huge. And although, yes, they are fat, they are also extremely muscular. They eat a special stew called chankonabe and drink lots of beer to sty ‘fighting fit’ The other noticeable difference? Fewer Japanese wrestlers. There is a famous and popular Bulgarian, Kotoishi (they all take, or are given, Japanese names) who is in the top five. The yokuzuna (reigning champion) is Hakuho, a Mongolian, and the former champ, a media bad boy, was the Mongolian Asashoryu, who recently retired. Japanese sumo wrestlers are usually smaller than their international rivals. The number of non-Japanese wrestlers each stable can have has been limited, to prevent non-Japanese from completely dominating the sport because of their size and strength.

This year, sumo was disrupted and the March Grand Sumo Tournament cancelled when a fight-fixing ring was discovered. Sumo’s reputation has long suffered from allegations of rigging and connections with the yakuza. It was reinstituted in May, but the smear on sumo remains.

Here are a short glossary of sumo terms, for the budding enthusiast.
(adapted from Wikipedia)

chankonabe (ちゃんこ鍋)
A stew commonly eaten in vast quantity by sumo wrestlers as part of a weight gain diet. It contains dashi or stock with sake or mirin to add flavor. The bulk of chankonabe is made up of large quantities of protein sources, usually chicken, fish (fried and made into balls), tofu, or sometimes beef; and vegetables (daikon, bok choy, etc).

chikara-mizu (力水)
Power-water. The ladleful of water with which a wrestler will ceremonially rinse out his mouth prior to a bout, handed to him by either the victorious wrestler of the previous bout if he was on the same side of the dohyō, or by the wrestler who will fight in the bout following.

chonmage (丁髷)
Traditional Japanese haircut with a topknot, now only worn by rikishi and so an easy way to recognize that a man is in the sumo profession.

dohyō (土俵)
The ring in which the sumo wrestlers hold their matches, made of a specific clay and spread with sand. A new dohyō is built prior to each tournament.

gunbai (軍配)
A war fan, usually made of wood, used by the gyōji to signal his instructions and final decision during a bout. Historically, it was used by samurai officers in Japan to communicate commands to their soldiers.

hakkeyoi (はっけよい)
The phrase shouted by a sumo referee during a bout, specifically when the action has stalled and the wrestlers have reached a stand-off. It means, “Put some spirit into it!”

heya (部屋)
Room, but usually rendered stable. The establishment where a wrestler trains, and also lives while he is in the lower divisions. It is pronounced beya in compounds, such as in the name of the stable. (For example, the heya named Sadogatake is called Sadogatake-beya.)

honbasho (本場所)
A professional sumo tournament, held 6 times a year in the modern era, where the results affect the wrestlers’ rankings.

rikishi (力士)
Literally, Strong man. The most common term for a professional sumo wrestler, although sumōtori is sometimes used instead. See 力士 in Japanese.

shikiri (仕切り)
Toeing the mark. The preparation period before a bout, during which the wrestlers stare each other down, crouch repeatedly, perform the ritual salt-throwing, and other tactics to try and gain a psychological advantage.

shiko (四股)
The sumo exercise where each leg in succession is lifted as high and as straight as possible, and then brought down to stomp on the ground with considerable force. Shiko is also performed ritually to drive away demons before each bout and as part of the yokozuna dohyo-iri.

shikona (四股名)
A wrestler’s “fighting name”, often a poetic expression which may contain elements specific to the wrestler’s heya. Japanese wrestlers frequently do not adopt a shikona until they reach makushita or jūryō; foreign wrestlers adopt one on entering the sport. On rare occasions, a wrestler may fight under his original family name for his entire career.

tachi-ai (立ち合い)
The initial charge at the beginning of a bout.

yaochō (八百長)
“Put-up job” or “fixed game”, referring to a bout with a predetermined outcome.